“A model of the genre . . . a powerful social history of the inter-German border.”

How East and West Germans Made The Iron Curtain 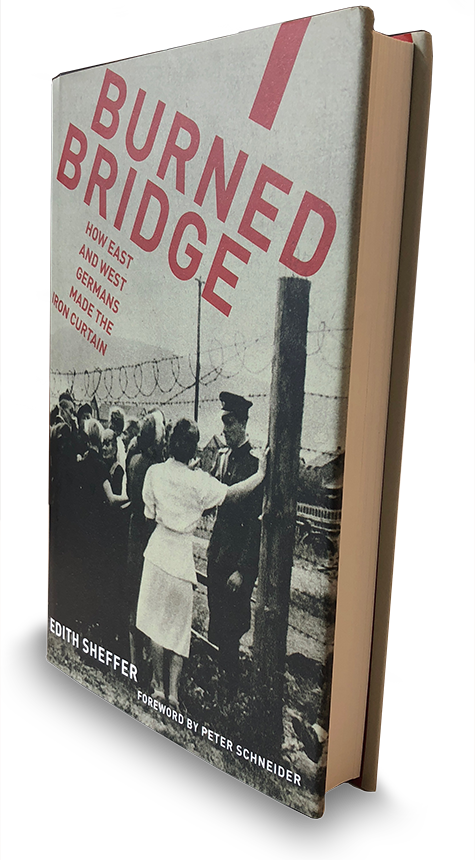 The building of the Berlin Wall in 1961 shocked the world. Ever since, the image of this impenetrable barrier between East and West, imposed by communism, has been a central symbol of the Cold War

Based on vast research in untapped archival, oral, and private sources, Burned Bridge reveals the hidden origins of the Iron Curtain, presenting it in a startling new light. Historian Edith Sheffer’s unprecedented, in-depth account focuses on Burned Bridge-the intersection between two sister cities, Sonneberg and Neustadt bei Coburg, Germany’s largest divided population outside Berlin. Sheffer demonstrates that as Soviet and American forces occupied each city after the Second World War, townspeople who historically had much in common quickly formed opposing interests and identities. The border walled off irreconcilable realities: the differences of freedom and captivity, rich and poor, peace and bloodshed, and past and present. Sheffer describes how smuggling, kidnapping, rape, and killing in the early postwar years led citizens to demand greater border control on both sides–long before East Germany fortified its 1,393 kilometer border with West Germany. It was in fact the American military that built the first barriers at Burned Bridge, which preceded East Germany’s borderland crackdown by many years. Indeed, Sheffer shows that the physical border between East and West was not simply imposed by Cold War superpowers, but was in some part an improvised outgrowth of an anxious postwar society.

Ultimately, a wall of the mind shaped the wall on the ground. East and West Germans became part of, and helped perpetuate, the barriers that divided them. From the end of World War II through two decades of reunification, Sheffer traces divisions at Burned Bridge with sharp insight and compassion, presenting a stunning portrait of the Cold War on a human scale. 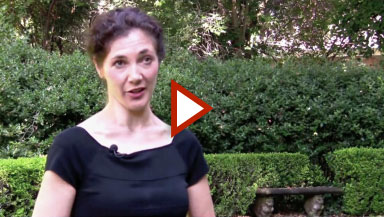 WATCH
Edith Sheffer: In Their Own Words 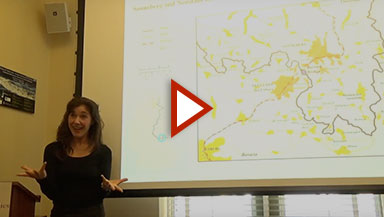 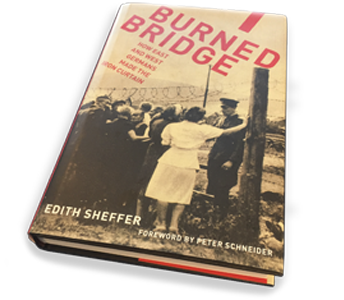 “A major contribution to the social history of the inter-German border. Its findings highlight the increasingly militarized boundary’s dramatic impact on the lives of local residents better than any existing study has, and she also succeeds in showing how the area’s population helped to shape some of the local realities in the border zone. . . insightfully and convincingly examines the experiences, perceptions, and mentalities of “average people” on both sides of the barrier during the four decades of Germany’s Cold War division.”

“Eschewing familiar tropes of totalitarian repression, Sheffer’s nuanced account reveals how the East German regime’s own weakness necessitated state reliance on local participation, such that border residents contributed to their own captivity . . . Sheffer’s meticulous research into local and federal German archives, interviews, the press, and questionnaires exposes at a micro-level how power was exerted diffusely in Germany’s Cold War regimes.”

“Edith Sheffer’s exemplary study of the social and cultural history of the Iron Curtain convincingly demonstrates that the demand for border control was popular both in the GDR and in the FRG . . . meticulously reconstructing the wide scope of everyday accommodation.”

“With this impressive database, she is able to reconstruct not only the details of events that remain in people’s minds, but also those that largely disappeared from public memory. . . Sheffer deftly connects the local history of the border with the related histories of East and West Germany. . . Going far beyond attempts to get at Cold War culture through abstract statistics, political histories, or displays of consumer goods, this study reveals the Cold War as a lived experience. It succeeds well in connecting the Cold War as a process in international relations with the life of the people at its front.”

“Apart from having provided this excellent ethnographic (and psychographic) historical account of both walls, Sheffer has also drawn some apt conclusions and rightly alarming comparisons. While she notes that, as subsequent events in the former Yugoslavia bore out, this Cold War Wall essentially kept a lid on serious violence in Europe, she also suggests what it signifies for the many other walls we have built around the world today. While the European Union has indeed eliminated internal borders, it has all the more fortified its external ones–keep those “others” out. Such walls have a long tradition–China’s, Hadrian’s–but we do not seem to have learned much from their human costs or eventual fates, and so we continue to build them, whether it is a “security fence” in Israel or a similarly obscene structure along the Mexican-U.S. border.”

“On the basis of an extraordinarily wide sweep of archives, publications and interviews, the author exemplifies the process of division and its impact on people’s habits and thoughts . . . This clearly written book is marked by fair judgments and illuminating detail. It will provide any who read it with a new perspective on the Cold War and the postwar history of Germany. Here readers will also find a major clue to a domestic problem the Germans still have to cope with. […] This book offers a challenging preview of issues that will face Korea if it is ever again one country.”

“An extremely stimulating local case study—executed with remarkable analytical force . . . The rich source base is conveyed by excellent academic prose. The many interwoven anecdotes and life experiences make for a most vivid narrative . . . Never before has a history of the inter-German border been so cohesive and focused, an exemplary ‘biography of the border,’ so to speak . . . Sheffer’s study sets the standards against which future research on the inter-German border must be measured.”

“This compelling history brings the issue of the inter-German border to a more personal level: a bitter rending of twin cities, a tearing apart that likely happened all over Germany . . . Any audience with an interest in this topic will find this accessible history an excellent way to explore the impact of the Cold War experience on a population”


“What we learn in this carefully researched study—accompanied by powerfully direct photographs—is how the two sides accommodated to the ever-deepening division of Germany . . . The pronounced alienation between “Ossi” and “Wessi” was not, she insists, a product of forty years of separation; the mutual antipathy was a contingent result of spiraling irritations during the early 1990s. This is a thought-provoking assertion, one that is worth a closer look as more historians are drawn to study the course of unification.”

“An accessible, intriguing academic study tracking the building of the “wall in the head” between East and West Germany long before the actual construction in 1961 . . . one model experiment through which the entire mindset of the Iron Curtain can be viewed.”


“Sheffer has written a meticulous analysis of a social experiment that began in 1945 . . . is lucidly written with plenty of anecdotes.”

“Sheffer’s meticulous reconstruction of life on the German-German frontier sheds welcome light on broader questions of German history, and on the way human communities create and recreate themselves.”

“Sheffer traces divisions at Burned Bridge with sharp insight and compassion, presenting a stunning portrait of the Cold War on a human scale.”

Edith Sheffer, Burned Bridge: How East and West Germans Made the Iron Curtain

If Edith Sheffer‘s excellent Burned Bridge: How East and West Germans Made the Iron Curtain (Oxford UP, 2011) has a single lesson, it’s that dividing a country is not as easy as you might think. You don’t just draw a line and tell people that it’s now the “border,” for in order for borders to be borders, they have to be seen as such. Sheffer shows that for quite a number of years after 1945, the Germans in Neustadt and Sonneberg–closely situated towns in, respectively, the American and Soviet zones of occupation–didn’t really know whether the border was a border and, if so, what kind of border it was or should be. “It”–whatever it was–was shifting, lawless, contested, resented, profitable, and sometimes deadly. The Grenze at Burned Bridge was really a kind of anarchical region dividing people who were in no way different from one another but who were compelled to behave as if they were by two occupying powers. The degree to which they were so compelled differed and this made all the difference in the end (the end being 1990, the year of reunification).
Read More

Edith Sheffer shows how the residents of East and West Germany built their own walls.
Read More

Exploring 'The Wall in the Head'

The border that split Germany marked the boundary between the ideological systems of capitalism and communism and became a physical manifestation of Winston Churchill's metaphorical Iron Curtain that divided the Soviet and Western blocs during the Cold War. The border caused widespread economic and social disruption on both sides.

In her new book, Burned Bridge: How East and West Germans Made the Iron Curtain (Oxford), historian Edith Sheffer recounts how, from 1945 and through reunification, ordinary Germans living on the border gave psychological shape and a physical presence to this imaginary line imposed by superpowers.
Read More

For all press related to Edith Sheffer, please visit this page.

“Sheffer has written a meticulous analysis of a social experiment that began in 1945 . . . is lucidly written with plenty of anecdotes.”
- Publishers Weekly

About the author: Edith Sheffer

Edith Sheffer is a historian of Germany and central Europe, and a Senior Fellow at the Institute of European Studies at the University of California, Berkeley.

Sheffer's Asperger's Children: The Origins of Austism in Nazi Vienna, is a groundbreaking exploration of the chilling history behind an increasingly common diagnosis. 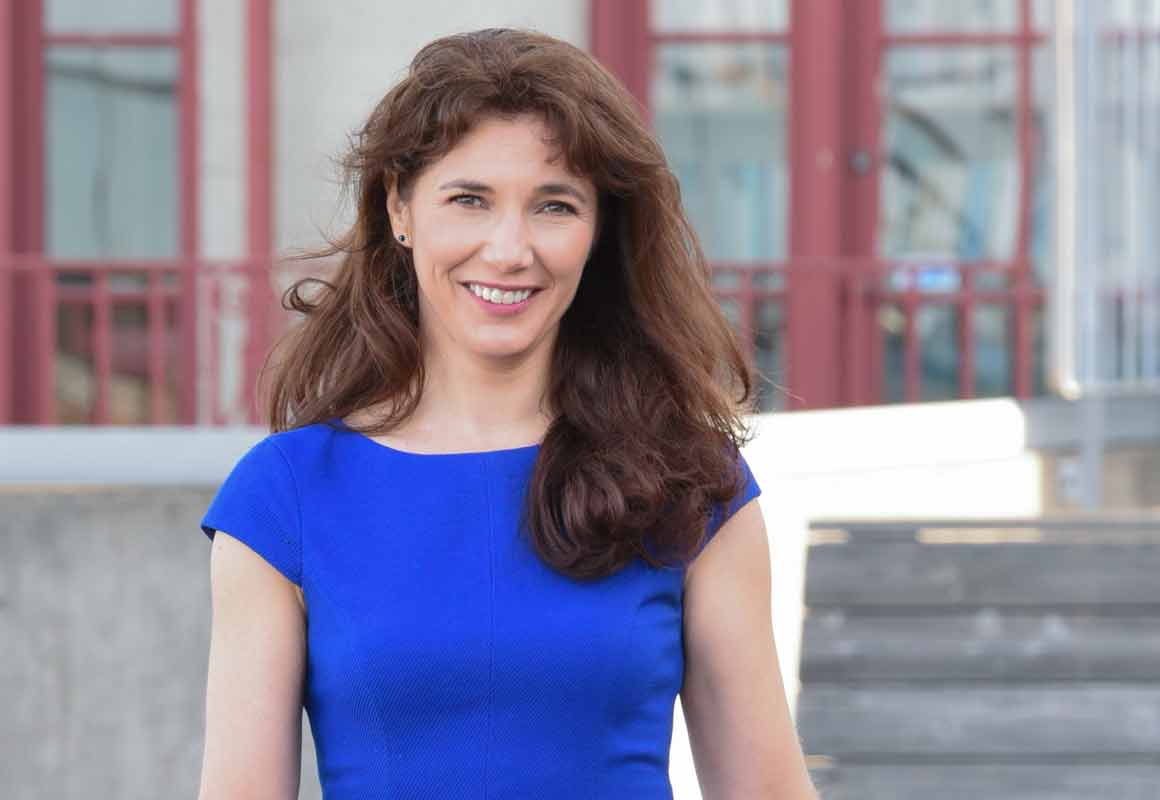